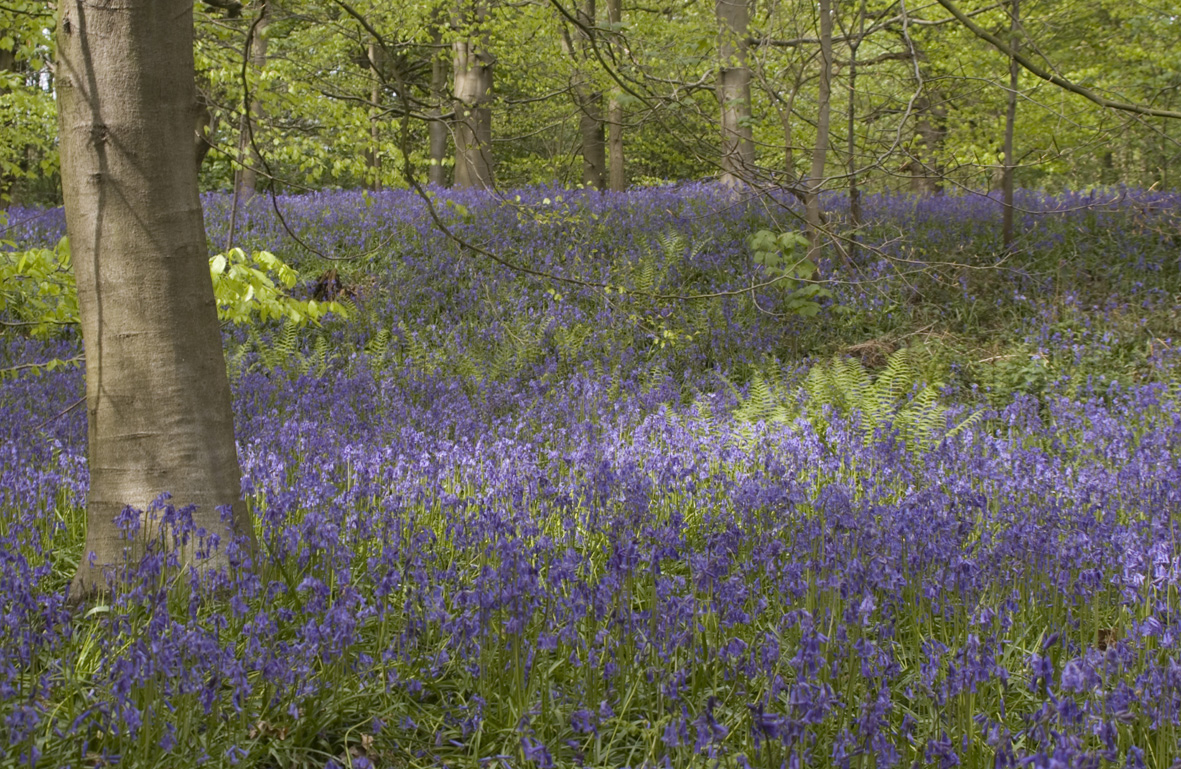 A well loved and much visited rare ancient semi-natural woodland noted for its spectacular bluebell displays each spring.  What we refer today as “Middleton Wood” is a wooded area to the east and west of Curly Hill now covering 38.04 hectares.

The wood is largely a place for quiet walks.  Ilkley Scouts’ annual Halloween Trail is a popular event.   Please check the calendar for future events.

Middleton Wood (East and West of Curly Hill) is a collection of smaller woods known by a variety of names over its long history: Coppice (later Coppy) Wood at the western end through Stubbings (1851) and Stubham Wood (1892), straddling Curly Hill to Middleton or Hudson Wood and Nell Bank Wood at the eastern limit.  Both Coppice and Stubbing (Anglo-Saxon for clearing) attest to both the length of time the area has been wooded and its function as a productive woodland.  Coppice and “stubbing” indicate that the trees were being actively managed to produce sticks, poles, timber and possibly charcoal by periodic cutting.  Stubham probably refers to the ancient hamlet that existed in the clearing. Part of the ancient woodland along the lower slope has been developed for housing.  Many of the trees enclosed by the developments are covered by Tree Preservation Orders to help maintain the landscape character, including the 500 year old Stubham Oak (41 Curly Hill).

The family mausoleum of Arthur Hentzen, Bradford wool merchant, is situated in the south western edge of the woodland. Historic records indicate that woodland has been present on site since at least 1600 and is thus formally designated as Ancient Semi-Natural Woodland – only 1.2% of all woodlands in Great Britain are classed as “ASNW”.  A number of indicator species also point to a long history of woodland including, bluebell, wood anemone, dogs mercury and wood sorrel.

The dominant tree species is oak (Quercus robur and Quercus petraea), however, in some wet areas alder is dominant and ash, beech, birch, rowan, sycamore, hawthorn, copper beech, holly, Norway spruce and  white poplar are also present.  A survey of oak numbers and health was carried out by Indy Gosal and Dr David Pilbeam between 2010 and 2012. A wide range of insects are attracted to the flowers throughout the woods. Many fly species are important pollinators and they come in many shapes and colours. Photograph: Andrew Cutts

Access is via marked entrances on Curly Hill and Denton Road, permissive and public rights of way are mostly natural and unsurfaced. The terrain is generally steep and uneven.

What's on at Middleton Woods