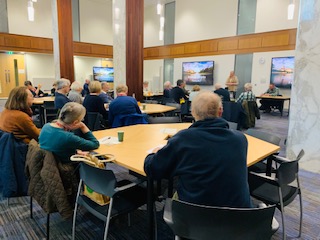 Friends groups from across the district gathered together on Saturday 1st February and agreed to found a new parks forum. Bradford Parks Forum will work in partnership with the Council and act as a community voice and advocate for the districts Parks and Green Spaces.

Allan Mirfield, Friends of Prince of Wales Park, Bingley, told the meeting how they had attended a meeting of National Federation of Parks and Green Spaces and became inspired to set up something similar for Bradford. Tom Bliss, one of the founders of Leeds Parks Forum in 2012 made a presentation providing insights in to the role of the Leeds forum and how it works.

There was consensus among those present that the Leeds forum provided a useful template for development and there was little point in reinventing the wheel. It was agreed to form a steering group from volunteers, supported by the Council to organise further meetings of the Bradford Forum. In terms of scope it was felt that the net should be cast wide and include “parks and green spaces” including those not necessarily connected to Council owned land.