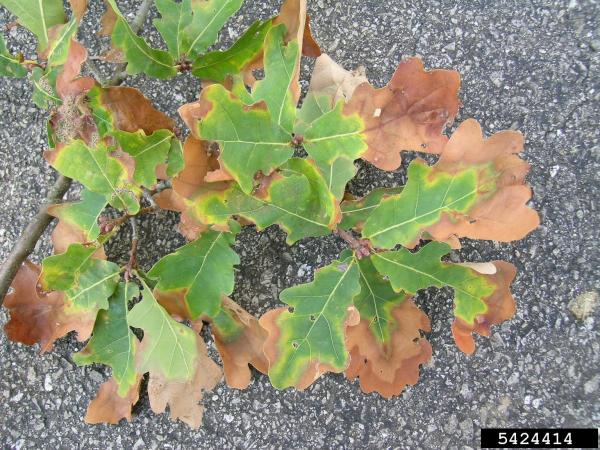 The Xylella bacterium affects a range of woody plants including olive, grapevine, and several broadleaf trees.  Symptoms include browning of the leaves, wilting of foliage, withering of branches, and dieback sometimes resulting in death of the plant.  A factsheet on X. fastidiosa including photos, can be found by clicking here.

Xylella is understood to have originated in the Americas but is now found in Europe.  The movement of plant products across borders is being restricted to minimise its spread.  A particular concern is the fact that some insects such as froghoppers and leafhoppers can spread the bacteria from plant to plant.

At present Xylella has not reached the UK.  However, on the European mainland it is causing severe problems in commercial olive crops across France and Italy.  Plants in the UK that could be at risk include pedunculate oak Quercus robur, wych elm Ulmus glabra, and plane Platanus occidentalis.

Prevention is better than cure

We can help to prevent the spread of this and other diseases across the landscape.  Simple biosecurity practices such as cleaning your footwear after a walk can help.  When buying imported plants check it has a plant passport and is from a reputable nursery.  More information on biosecurity in the countryside can be found on the Forestry Commission website.

If you spot a plant suffering due to suspected disease you can report your findings to the Forestry Commission via their online Tree Alert.

The word ‘disease’ can instantly make us feel fearful.  Many of us have suffered with a disease e.g. measles, chickenpox, scarlet fever etc.  Such illnesses can generally be treated with medicine and a full recovery typically results.  This positive outcome is due to awareness of such diseases and medical research over many decades.

A disease is defined in the Cambridge Dictionary as: (an) illness of people, animals, plants, etc., caused by infection or a failure of health rather than by an accident

Diseases are part of everyday life and can be caused by pathogens or internal dysfunctions.  In nature diseases are another component maintaining balance within populations, as weaker hosts are more susceptible.  However, natural cycles can be distorted significantly with a new disease and especially so when a cure is not available.

As we move more readily and rapidly around the globe, and climate change alters the environment, there is a greater chance of spreading disease across large distances and landscapes.  Movement of natural goods in the form of soil, timber, and plants can spread disease without us realising.  Global warming may extend the natural range of some diseases.

In terms of forestry and horticulture, many diseases have crossed international boundaries and caused severe problems in the new zones.  Dutch elm disease, caused by the fungus Ophiostoma novo-ulmi, devastated the elms across the UK in the 1970s and Chalara or ash dieback may have a similar impact on ash trees.

The rapid spread of diseases is causing foresters to reflect on how we value and manage trees.  Sycamore has often been cast as a “weed”, and beech north of the Humber a non-native, resulting in foresters stripping these species out to create what we consider to be more natural woodlands.  Perhaps a more flexible approach to a biodiversity that includes sycamore and beech may help us to retain more resilient woodlands in our landscape?