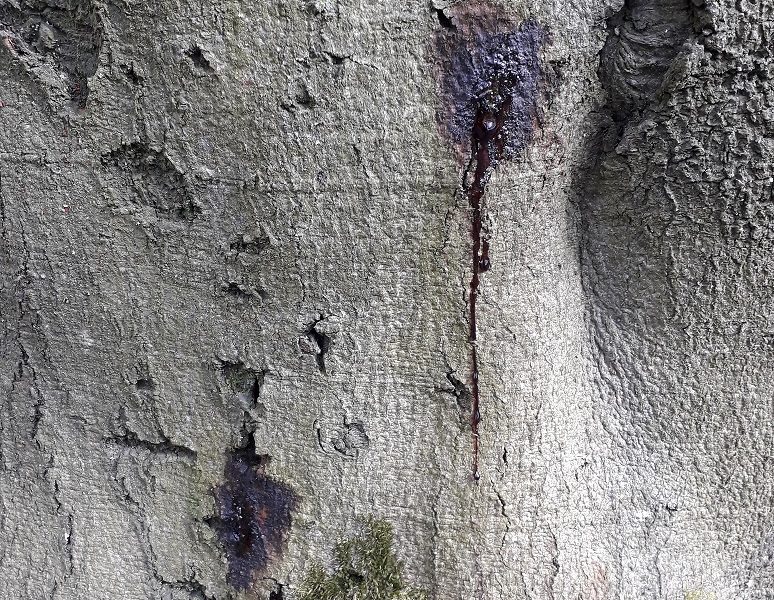 Over recent years several species of Phytophthora have been discovered in Bradford Council woodlands. The word ‘Phytophthora’ derives from the Greek language and literally translates as “plant destroyer”. This naming and translation highlights the potential severity of such pathogens.

Phytophthora ramorum was discovered at St Ives Estate in 2017. This particular species is classed as a notifiable disease therefore the landowner must act responsibly to minimise the chance of spread and further infection elsewhere. We took action at Betty’s Wood and felled a stand of larch that was infected with P. ramorum.

In the last couple of weeks a further Phytophthora, this time Phytophthora cambivora, also known as ink disease, has been confirmed at Judy Woods in Wyke. This pathogen is causing rapid decline in health and vigour of the mature beech trees in the woodland.

Diseases are inevitable in the natural world, however, when they get out of sync spanning wider geographical borders than their natural range, they can cause great harm. In Judy Woods we are not only concerned about tree health but also the health and safety of site users. With this in mind we will be felling a number of mature beech along the main footpath corridor in the coming months.

Initially, areas where trees are felled can feel empty and don’t appear as woodland. However, woodlands are dynamic environments changing continuously from a scale of seconds through to centuries. The deadwood will immediately be an important habitat for fungi and invertebrates. And in a matter of just a few years the open glades will quickly establish with natural regeneration from the seed of adjacent plants and trees.

We can all play a part in reducing the spread of disease causing pathogens. Please ensure that you clean your footwear, clothing, pushchair, and bike, of all soil prior to visiting and exiting woodland sites.

Here is some further information on our responsibility in improving biosecurity and protecting our important woodland habitats.