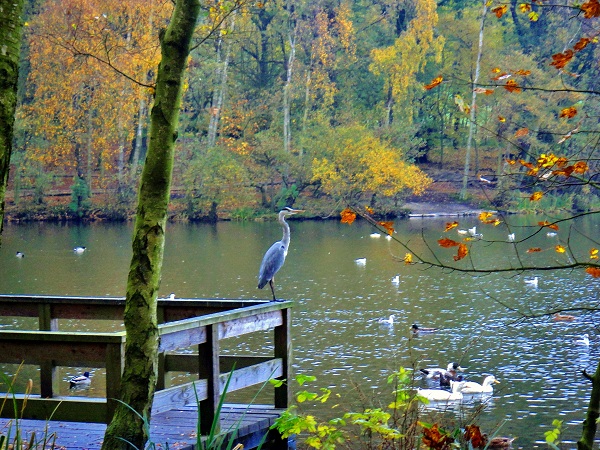 St Ives Country Park is one of Airedale’s hidden gems  offering something for all the family in all seasons. It is also Bradford Districts largest park at 217ha.

St Ives host many public and community activities throughout the year from bat walks to fell running!  Check the calendar for up coming events and activities.

As a Country Park with the focus on the great outdoors St Ives is the place for walks, adventure play, horse riding, cycling, golf, fishing and archery.  The main attraction for families with children under 14 is the large centrally situated Play Area.  For those feeling a little more adventurous the footpaths and bridleways explore the historic estate and provide challenges for all abilities.

Airedale has been a home to humans for at least 4,800 years and the estate we now know as St Ives has been witness to that long history.  Pre-historic finds on the estate point to people living here from the late Bronze Age (2,800 – 500 BCE) (ref).  Whether the Romans bothered the Brigantes who occupied the area is unknown – does the “Roman Road” on Harden Moor lead anywhere? The 1066 Doomsday Book records ploughland (6) and woodland (2 Leagues?) at Halton, the nearest location to the “modern” estate, belonging to the Earl of Northumberland: Gospatric son of Arnketil.  Gospatric part in the unsuccessful uprising of 1068 against William of Normandy led to his lands being passed to Erneis de Buron  who had fought alongside William at Hastings.  Around a hundred years later (1165) the land is granted to Rievaulx Abbey, who have possession for the next 355 years, until Henry VIII dissolves the monasteries in 1536-1541. Robert Ferrand purchased the estate in 1636 and began a period of ownership and development that lasted until 1929 when the estate was purchased by Bingley Urban District Council  During the intervening 300 years the yeoman Ferrand and Busfield families enclosed much of Harden Moor and created the estate we know today.

Did you know?  The estate was originally named Harden Grange until 1858 when it was swapped with “St Ives” the property that now bears the name of Harden Grange in the valley below.

The Grade II listed Mansion House and associated buildings form the centre piece of the estate.  The Mansion is now leased and undergoing conversion to private residencies.  The gardens have largely been lost but the Visitor Garden and Visitor Room maintained by the Friends of St Ives provide a glimpse in to the past.  The romantic walks and pleasure gardens to the west of the Mansion can still be accessed via the footpath network.

Under the  municipal ownership Bingley UDC and from 1974 City of Bradford MDC the grounds were opened to the public, a golf course was added (now a private club) and some areas and buildings leased to private enterprises.

Wildlife abounds at St Ives and numerous types of plant and animal are represented.

Birds are perhaps the most obvious animals present throughout the year. The usually shy jays are particularly conspicuous in winter as they fly from dense woodland to open ground to cache acorns for leaner times. Due to the mosaic of habitats at St Ives the birds vary widely according to preferred habitat and food type. Look closely for the slender bill of the treecreeper as it shuffles up tree trunks probing for its invertebrate food amongst cracks in the bark. Finches group together in winter to gain safety in numbers. These groups can be seen and heard in the treetops searching out the fine seeds of alder, birch, and various conifers.

The woodlands vary across the site in relation to soil conditions, aspect, planting stock, and management. A wide range of native trees is present complemented with non-native species such as larch, spruce, and horse chestnut. Trees are planted on the estate for their beauty and eventual timber value depending on the species characteristics.

The majority of the birds present during spring and summer will feed their youngsters on a diet of invertebrates. Rich in protein, this food source enables the chicks to develop quickly and build their muscles required for flight. Some of the fledglings may become food for the predatory birds in the locality including sparrowhawk and kestrel. The latter sometimes being referred to as “windhover” for good reason due to its prowess in the air.

Invertebrates (animals with no backbone) are important not only as food for other creatures but as recyclers, aerators and creators of the soil, and pollinators. If it weren’t for insect pollinators we would have a much poorer and less tasty diet – imagine life without luxuries such as jam, cider, ketchup, and chocolate! Crustaceans are classed as invertebrates and at St Ives we are lucky to have a population of the ever increasingly scarce white-clawed crayfish. This native of freshwater habitats has suffered greatly due to crayfish plague brought to the UK via the introduced signal crayfish. Please help conserve the crayfish and other species on the estate by adhering to information provided on notice signs.

Throughout the year there are always plants to be enjoyed. In winter the form, and sheer grandeur, of the mature deciduous trees can be enjoyed. Spring arrives with a riot of colour carpeting parts of the woodlands in the form of English bluebell and other ancient woodland indicators. In summer the fronds of various fern species can be enjoyed in the dappled light under the tree canopy.

The wildlife in its multitude of forms at St Ives is very special. Please leave only footprints and take away only photographs and memories. 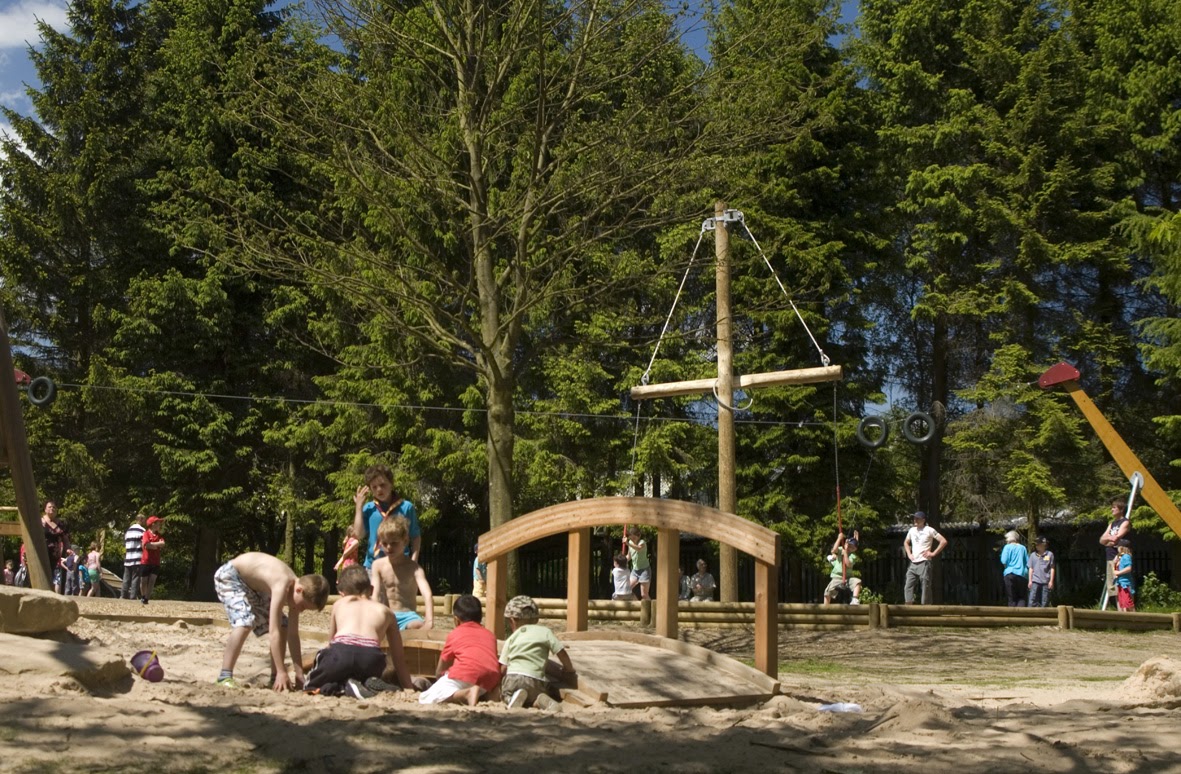 There are features for all abilities in the play area.  Wheelchair users are able to access a range of play equipment via the board walk from the car park, including..........  Other equipment includes high towers, rope bridge, state of the art tyre swings, maypole, sand play & tyre swing along with natural play elements such as rocks, fallen trees and a dry river bed.

Walkers, horse riders and cyclists who "share with care" are all welcome at St Ives.  Some routes are open to all traffic and some are restricted (see signs) to walkers only and dogs should be kept under close control at all times. There are a number of  self contained circular walks within the estate as well as connecting with the wider Rights of Way network including the Calder Aire Valley link.  There are level surfaced walks that are accessible to all around Coppice pond and some moderate gradients in Betty's Wood.  The site has good signs and waymarks. 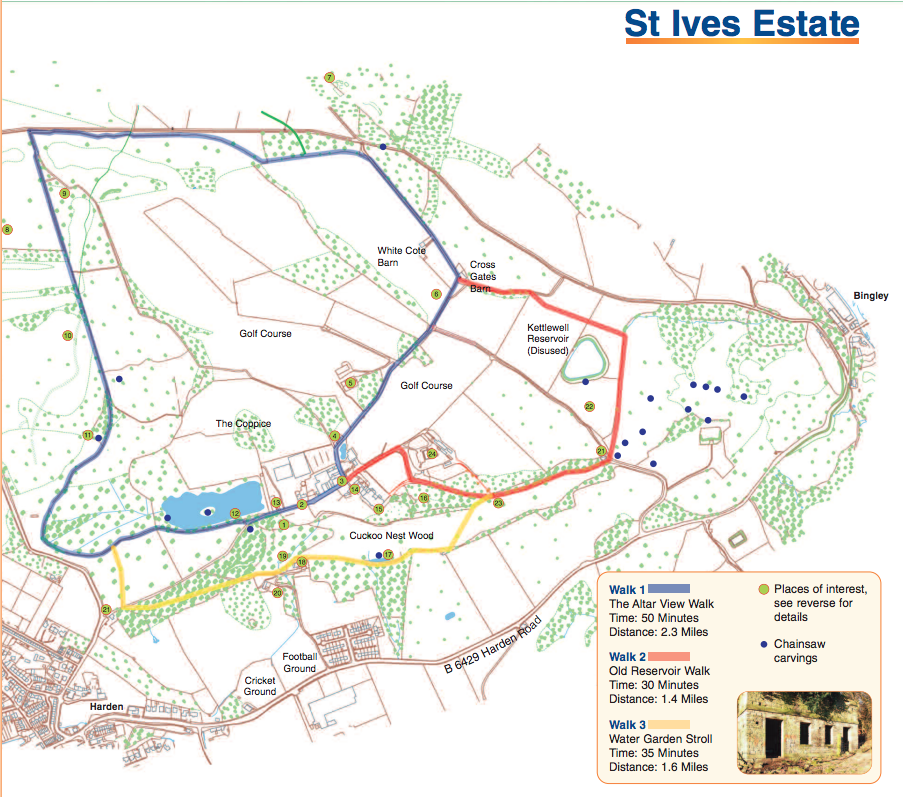