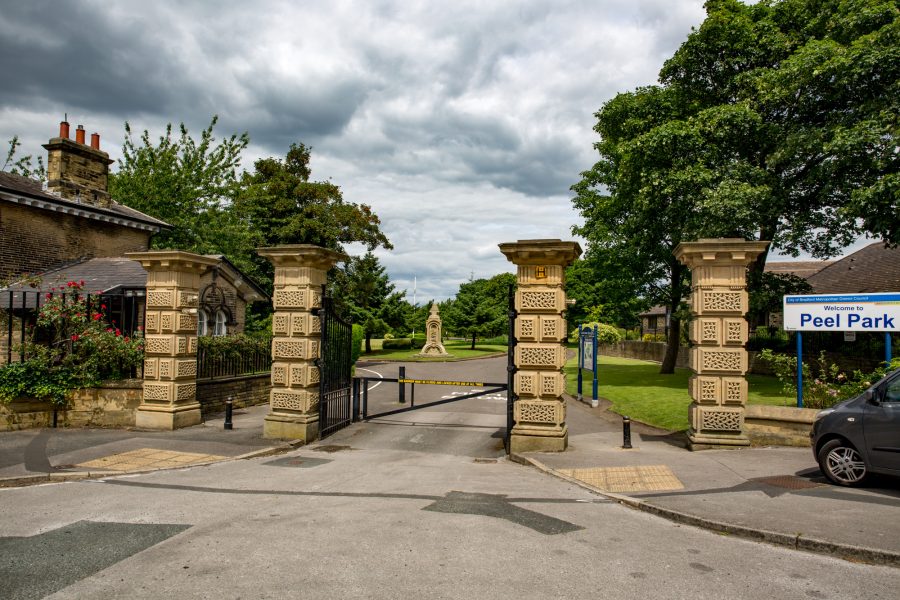 Most of the features you would expect in a Green Flag park can be found in Peel Park.  Although laid out in a small valley the paths are surfaced and with largely gentle gradients they are accessible to all and ideal for gentle exercise.  The terrace with public sculptures leads to a viewing platform that offers excellent views over the City of Bradford.

Peel Park is one of Bradford’s largest (22.6ha) and oldest public parks opened in 1853 on land purchased through the 19th century equivalent of “crowdfunding”: public subscription.  Following the death of Sir Robert Peel in 1850 a meeting was held at St George’s Hall, Bradford, where it was agreed to raise funds for a memorial to Peel in the form of a public park.  Peel had served two terms as British Prime Minister and was largely responsible for creating the modern police force – giving us the names “bobbies” and “Peelers”.  In the 1870s the Park was conveyed to the Municipal Borough of Bradford who act as trustees and registered Peel Park as a charity in 1965 (registered charity No.523509).

In 1931 and 1947 Peel Park played host to two historical pageants of Bradford – an early form of “cosplay” where local residents “dressed up” to re-enact and celebrate episodes from the City’s history. In recent times Peel park continued to celebrate the district’s culture by hosting the Bradford Mela.  The park has also become a favorite venue for British Cycling’s national cyclo-cross events. At only 1.4 miles from the centre of Bradford Peel Park is a green oasis in the urban environment.  The park has a good balance of trees and open park land, ornamental gardens, small lake and natural areas. The small lake attracts a variety of water fowl, owls are often heard, and there is a good collection of “garden birds” in the hedges and shrubs.  The grey squirrel has taken up residency in the park and the odd urban fox might be seen.

There is level access from Cliffe Road, Bolton Road and Lister Lane. There are level circular routes from Lister Road and gentle gradients at Cliffe Road and Bolton Road entrances.

Car Parking on Lister Road, Cliffe Road and some on Bolton Road near each entrance. Buses: 640 and 641 to Bolton Road entrance.

Friends of Peel Park work in partnership with the Council to look after the park and provide Peel Park Cafe.  More details of the group can be found on facebook.

What's on at Peel Park