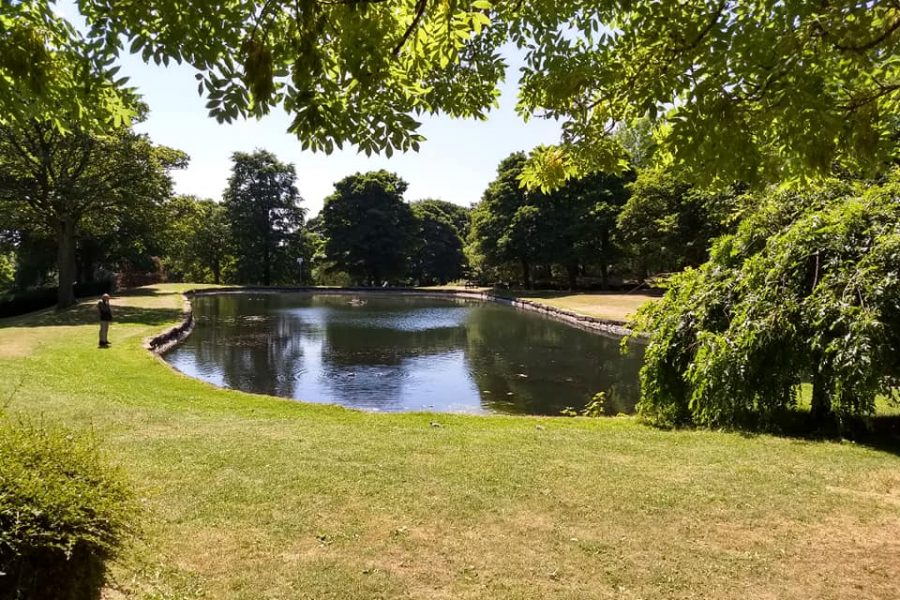 Harold Park is one of the district’s award winning Green Flag Parks. A vital and much loved resource to the community of Low Moor.

The Friends of Harold Park group organise a variety of events throughout the year including an Easter Egg Hunt, Harold Park Gala, Halloween Ghost Hunt, Remembrance Sunday Service and Carols by Candle Light. For more details checkout the Facebook Page.

There is something for all the family in Harold Park, whether it’s having five minutes on a bench watching the world go by, enjoying a brisk walk round the paths, working out on the trim trail, having fun in the play area or pitting your wits against the fish in Harold Park Dam.

There are a number of Play Areas in the park with a variety of play features  from the marble run, to traditional swings and slides or the more adventures cable run.  There is also a well set up trim trail where you can enjoy some of the benefits of a gym work out (without the fees!) in a natural setting.

Harold Park is the only park in the District with its own Dam where it is possible to fish.  To the south of the park is a near rectangular lake with an area of about 7 acres (2.8 hectares). The lake has a perimeter footpath and an island wildlife refuge. It is well stocked with bream, carp, perch, roach, and tench and fishing permits can be purchased from Bradford No1 AA.

The park also boasts a very special Sensory Garden that was conceived and is maintained by the Friends of Harold Park. The project transformed the run-down tennis court into a garden filled with flora features that are noted for their textures, scents and colours. It is now a wonderful place to sit and experience a little bit of the natural world. Thanks to the on going efforts of the Friends of Harold Park volunteers  who help with up keep and bringing the park alive with events the park has won praise and accolades from both Green Flag Award Judges and Judges from the RHS Yorkshire In Bloom Competition.

Harold Park is named to perpetuate the memory of Harold Gawthorne Hardy, who was a distinguished member of the Hardy family, connected with the founding and success of the Low Moor Ironworks. He died in 1881, aged 32 and is commemorated by an obelisk in the park. North Bierley Urban District acquired the land and created a Public Park under the Inclosure (Wibsey Slack and Low Moor Commons) Provisional Order Confirmation Act 1881. It was formally opened to the public on 19th September 1885. North Bierley UDC became part of Bradford City Council in 1899 when the park was further extended with the addition of a recreation ground.

In 1902 a memorial sundial, funded by subscription, was erected to the memory of Frank W Milligan of Royds Hall and Bradford men who fell during the Anglo-Boar War (1899-1902).  Milligan was a noted first class cricketer who stayed on after taking part in Lord Hawkes tour of South Africa (1898-99) to become a combatant.  Rising to the rank of lieutenant he was  killed aged 30 during the campaign to relieve Mafeking on 31st March 1900. The memorial was unveiled by Lord Hawke. It originally stood near the Cemetery Road entrance gates but currently stands in the memorial garden near Park Road. For the bird watcher it is possible to see coot, great crested grebe, mute swan, tufted duck, moorhen, and mallard around the Dam, and mistle thrush, blackbird, redwing, blue tit, chaffinch and pigeon around the park.