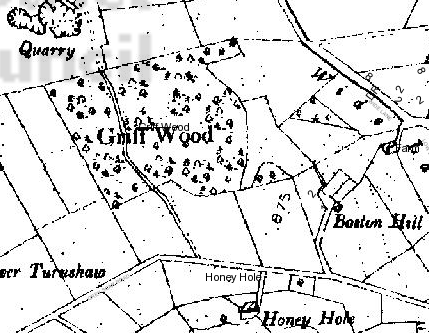 Griff Wood (4.9ha) is located 1km west of Oakworth (oak enclosure) on the high ground between the valley carrying Newsholme Beck to the north and Worth Valley to the south.  Griff Wood’s position makes it a visually prominent part of the local landscape, although, there are other smaller woods and shelter belts in the area.  The immediate surroundings are improved hay meadows on three sides and a cemetery on the fourth. The 1851 Ordnance Survey map shows the area to be un-wooded and refers to Griff Hill; Griff Wood does not appear until 1892 series.  The meaning of Griff is uncertain but may refer to the short steep side spur on which the woodland now grows. It is likely the wood was originally a late 19th C. plantation to provide timber locally, the presence of a mature conifer crop indicates the original plantation has been cleared or harvested and replanted.  Before 1932 the wood had been in the ownership of William Haggas and Sons, a well known firm of worsted spinners and manufacturers.  It is believed the woodland was bought by Oakworth Urband District Council in 1935 and later transferred to the City of Bradford MDC in 1974 as part of large scale local government re-organisation.

Kestrel also known as “windhover” can sometimes be seen hunting in the grassland adjacent to the woodland.  This falcon is able to see in the ultraviolet spectrum and detect the urine trails of rodents amongst the tussocky grasses.  Using the less energetic method of ‘sit and wait’, tawny owls also hunt small mammals in the locality but launch their attack from a prominent branch in the dark of the night.